Not the best weekend (very long)

My trip to MN for World Team Tryouts this year has to be my worst trip ever. The only thing worse than having a sick dog is having a sick dog and being 2000 miles away from home. But on the bright side I have a really really bad memory and I'm already starting to forget how awful I felt (and I'm sure Icon has forgotten how awful he felt too). So for posterity I thought I should write a blog about it before I start asking people to remind me why we didn't run at tryouts on Sunday ;).

I knew something was wrong with Icon by Saturday afternoon, but I wasn't sure what. Icon just wasn't right. He can get moody sometimes when he doesn't get enough sleep though so I figured that was it.

On Saturday evening Kep invited us over to his room for a nightcap. 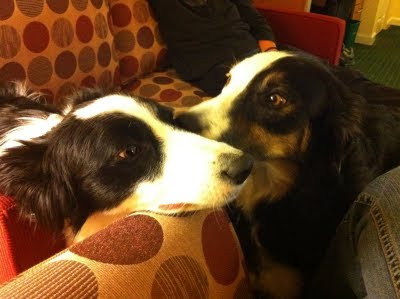 Icon just wanted to curl up on the couch.  Even Kep was wondering if there was something wrong with him. 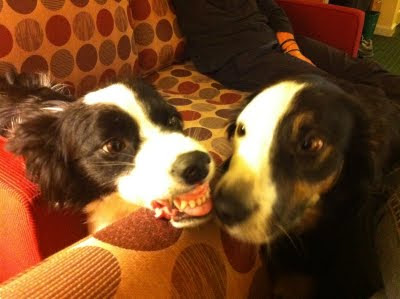 It's a good thing that what Icon had wasn't contagious or else Kep surely would have ended up with it.  Kep thought Icon was saying, 'Floss my teeth, please' and he did his best.

On Sunday morning he didn't get out of bed when I did and he didn't eat his breakfast, which is very odd for him.  Breakfast was ground turkey I bought from the local grocery store and figured maybe it was 'off'.  I still had some food from home, but it was in the freezer and needed to thaw. I brought it to the trial with us to see if he would eat later.

Large dogs were 3rd on Sunday so we had lots of time.  I took him out to walk a few times and he had very little energy, he ate his breakfast from home but reluctantly.  While the small dogs were walking I brought him into the stands and was holding him.  He felt warm to me.  I asked my friends if they thought he had a fever and luckily one of them had a thermometer in her car so we decided to check his temperature, which was 105 :(.  JD and Tantrum were about to run so I didn't want to bother them, but as soon as they had finished I asked her to look at him.  They found another thermometer and took his temperature again to be sure that he had a fever and JD checked him out and sent us off to the vet. 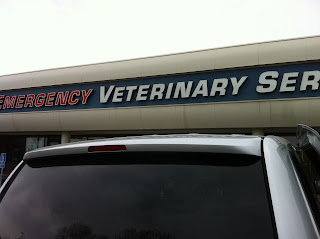 So Kep had to come out of the car and then Icon and I headed to the emergency vet.

By this point Icon didn't want to do anything but lay down.  This was pretty much the extent of his movement for the couple of hours that we were there. 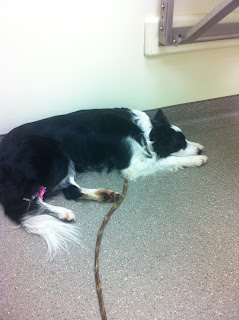 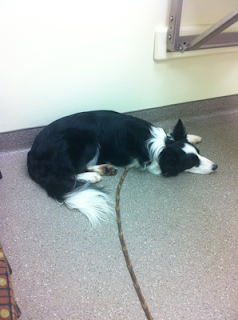 The emergency vet didn't find anything alarming aside from the high fever, CBC was normal aside from low platelets.  Tick test was negative, he was dehydrated so they gave him sub-q fluids and then he sent us on our way saying that it was probably a virus and Icon just needed to rest while it run its course, which was very good news.  I'm thankful it wasn't anything worse that required hospitalization. It was at this point that I started wondering how long I would be staying in Minnesota becuase I couldn't fly Icon in this condition... 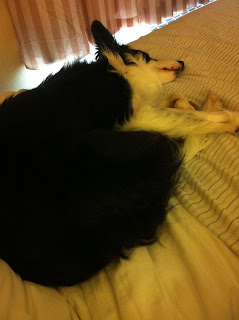 The emergency clinic was right near my hotel and I really didn't feel like going to back to the show site so we went to the hotel for a couple hours to rest.  We had to get back eventually to pick up Laura and Kep so we returned for the Large dogs Rd5, of course Icon stayed in the car.

The main reason I didn't want to go back was I knew everyone would ask me how Icon was doing, which I didn't want to have to deal with.  I know people ask because they are concerned about him and I'm grateful for that but to be asked every few minutes is a bit frustrating.


Sunday night was more of the same.  Icon had a fever, Icon slept, Icon ate a bit but reluctantly. 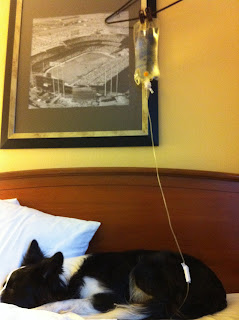 At JD and Holly's suggestion I convinced the emergency vet to send us home with sub q fluids (I used to have a cat with kidney failure so have given sub q many times) and rigged up a drip system in the hotel to juice Icon up on Sunday night.  He didn't even move for that.


I went to bed hoping he'd be miraculously better in the morning so we could take our flight at 11:30.  But he wasn't :(.  So I contacted some local people in MN (feeling a bit bad because it was around 6:30am) to see if there was a local internist that I could take him to.  University of MN was the place to go.  I spent the morning making our appointment, dealing with work,  the airline and rental car and finding a hotel to stay at that was closer to the University.

We dropped Laura and Kep off at the airport and then went to our appointment. 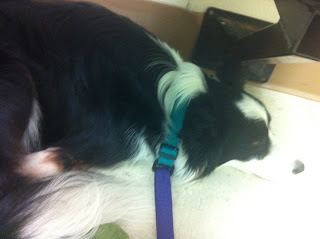 This was the first time I've ever been to a veterinary teaching hospital and I liked them, but it takes a loooooong time for an appointment.  This is because first the student will examine your dog and then they go and discuss the case with the veterinarian and then they both come back and the veterinarian examines the dog.  We had nowhere else to be so it was fine for us, just interesting.

Icon's condition was unchanged, although he was no longer dehydrated (and he still had a pouch of water under his skin from my giving him fluids in the morning).  The only thing this vet noticed was he has some enlarged lymph nodes.  So they did more blood tests and aspirated the lymph nodes (which found nothing).  The blood tests showed that his platelets had dropped again and at this point all of the vets I was consulting with (I was still in touch with JD and also my friend Kelly who was in England at WAO at the time) started talking about him having clotting problems and I had to start watching him for tiny bruises and hemorrhages on the gums and tarry black stools. We were working on two theories at this point, he had the tick born disease, anaplamosis or Immune-mediated thrombocytopenia.  We were hoping for anaplasmosis, so he was started on doxycycline to see if that would help.

Since he seemed to be in stable condition and wasn't dehydrated, they didn't feel he needed to be hospitalized, which I was so thankful for.  I would have been a mess if he wasn't with me. 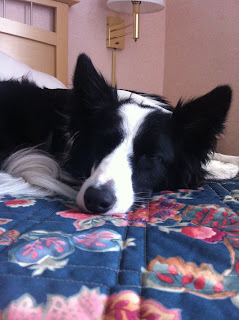 We headed over to the new hotel and started a very depressing evening.  The hotel was a complete dump and smelled funny, although the staff was very pleasant.  I didn't even bother putting my sheet from home on the bed. 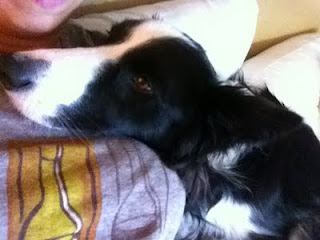 Icon did seem to feel a bit better on Monday night.  He ate his dinner with an appetite and he seemed a bit more aware.  He felt like snuggling for a few minutes.  His temperature was even down to 103.3, the lowest it had been until then was 104.5.

When I woke up in the morning Icon didn't want to eat and his temperature was back up to 104.4.  I felt defeated.  I just wanted to go home.  I spoke to the vet at U of MN and she THOUGHT it should be ok to fly him since he was stable and not dehydrated.  I knew I was taking a chance but I decided to fly him home.

I called the airline and luckily got a seat on the 11:30am flight that morning.  While at the airport I made an appointment for Icon at Kelly's clinic to get them to see him after we landed.  The flight was uneventful, Icon was fine, and we even landed 30 minutes early. 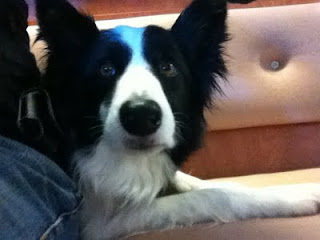 Icon and I headed over to see our 3rd vet in 3 days.


Icon was much improved in this exam, his temperature was down to 102.4 and he seemed more alert.  They took blood again and sent it out to a lab to get more accurate results.  The vet there felt it was very unlikely that it was tick born based on the fact that we had only been in MN since Thursday night and ticks often have to be attached for 24+ hours to transmit disease AND it takes 2-7 days for symptoms to show.  She felt he was recovering and that it was probably caused by some virus he picked up and needed to work out of his system.  We decided to continue him on the doxycycline just in case.

And then we were HOME.  What a wonderful feeling that was. 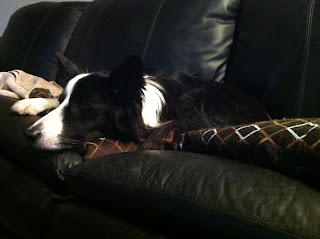 By the next morning Icon's temperature was down to 101.  The blood tests came back normal, his platelets were back within the safe range.

I guess it was just a freak illness for Icon.  I don't recall him ever being sick in the past, let alone THAT sick.  It was just very unfortunate that it happened when it did!  I'm taking him back to the vet on Tuesday to get blood drawn and sent away for a full tick titer, just to totally rule out the possibility of tick born disease.  And then I'm going to forget the weekend ever happened.

I'm a bit disappointed that we won't be going to France this year with the world team, but probably not as much as people would expect.  When I'm on the team I put a lot of energy and focus into it and by the end of last year I felt very drained.  I think a year of having that energy and focus back on my own life will be very good for me.

Icon and I are planning on going to the European Open again this year and I'm really looking forward to it!  I confirmed that I can combine it with a business trip in Switzerland so Icon and I will be in Europe for at least 2 weeks.  The place we're staying in Austria is a resort with full service spa and wellness treatments.  I just hope I will be able to leave the hotel and make it to the competition. :)
Posted by Channan at 1:04 PM 9 comments: