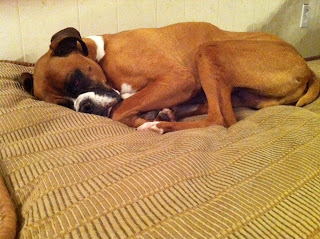 Apollo is back home!  I'm so happy, he didn't need surgery.  He was close though.  Not close to needing the surgery, but close to having it without need.

I am thankful to my regular vet for not feeling comfortable performing the surgery herself and referring me to the surgical specialists at VSA.  I am thankful to VSA for transferring us over to the medical side VMS instead of blindly operating on him.  And I am SO thankful to my agility friend Kelly who works at VMS for taking great care of him.  I knew she was an oncologist, but didn't realize she is an internist too.  I'm sure any vet would have done their best for him, but it was a load off my mind to have someone I know and trust taking care of him.


Apollo was exhausted last night.  He's looking much spunkier this morning.
Posted by Channan at 7:57 AM 6 comments:

So quiet and empty...

Apollo is sick.  He's at the vet with pancreatitis and a possible obstruction.  The house is so quiet and empty here without him...  It's a long story, but essentially I cleaned out the burnt grease drippings from my bbq and left that in a plastic bag on the bbq meaning to spread it on my garden.  But then I forgot about it and Apollo got into it and ate the burnt grease.
In general I like my vet clinic.  They have great hours, they are (mostly) accepting of the fact that I feed raw and don't vaccinate.  And the three vets have been there as long as I've been taking the animals there, which has to be about 6 years now.
But what I don't like about them is that they aren't staffed 24 hrs.  Apollo went there this afternoon and spent his afternoon and evening at the clinic.  Then at 7pm I had to go pick him up and take him and his films, stool sample and IV apparati to the overnight emergency clinic about 500 meters away.  Tomorrow morning I get to pick him up at 7am and take him back to my normal vet clinic.  The worst part of this is how HAPPY Apollo was when I picked him up.  He was so excited to be going home... but I just took him to another clinic where more strangers poked and prodded him and stuck their fingers up his butt.
﻿﻿﻿﻿﻿﻿
﻿﻿﻿﻿﻿
﻿﻿﻿﻿﻿﻿﻿

as Icon and I run an Exc B Standard course with NO side changes!!


It was actually a pretty fun course with subtle challenges.  Many experienced teams were fooled by the apparent simplicity.

It was a fun weekend overall.  I thought I entered Saturday and Sunday of the trial, but it turns out I entered Sunday and Monday.  Thankfully I had Monday off work so I could go both days :).  I was really happy with how Rampage did.  He got his first Exc B JWW Q and his first MACH points!  He even got more points that Icon, but that's just because Rampage was entered in 24 and the YPS is more generous there.  Icon's time was faster by a bit over a second.  Otherwise our albatross remains the weave poles.  I still haven't really been training Rampage on poles because I only have 20" poles at home and I don't want him doing 20" with his long back.  I ordered a new set, but if I want them delivered I won't get them until the 2nd weekend of Feb.  So I'm thinking of making the 1 1/2hr drive to pick them up myself on Saturday.


Apollo had fun in 20" Novice preferred this weekend and qualified in everything so now is Open Preferred!  (he already had a leg in each because after his first knee surgery I brough him back in preferred for a day before moving him back up to 24")

My phone was upgraded so now I have video capability.  It's pretty cool, although I think the novelty will wear off pretty quickly.
Icon demonstrates his piggybank trick.  The idea was to eventually have him put the money into a piggy bank, but I don't think that will happen because while we have enthusiasm for the trick, the finesse is missing.  If there's one thing I'm good at, it's training dogs to be frantic while clicker training.
This is Rammy's first time doing the trick with a coin and the small metal bowl.  Previously he's only done it with the large food bowl and a big plastic ring of keys.  He generalized the knowledge very well.  He's one smart boy.
And here's our blooper reel.
Posted by Channan at 8:01 AM 1 comment:

My camera miraculously started working again.  I love it when the laws of entropy fail and things start working again without me expending any energy :)

Icon's sure got some Cute Face

But if needed he can put a Sly Face on

The ever popular (and large) Tongue Face

The "I'm annoying Icon but he's ignoring me" face

Foster is too busy for Face Shots

But Polly's Faces are the best!

Please find below my 2010 resolutions and their resolution (in blue).

1. Get to work at a reasonable time. I'm aiming for 9:30, but I think I'll have to ease my way in.
This still doesn't happen often, I'm usually in the office by 10am.  But that's only because I normally roll out of bed and onto a 7am teleconference and then of course I have to respond to all of my work emails before I can leave the computer and head to the office.   So while I didn't technically keep this New Years resolution, I think I would still call it a 'win'.  For my company, at least ;)


2. Eat lunch (and/or breakfast) every day so I don't come home from work so hungry I can't help but eat a bag of Doritos.
I've been doing pretty well on this one the past year!  I've been good at eating both breakfast and lunch, but do still occasionally eat just one.   This is a 'win'!

3. Water the plants in my office more than once ever 3 months.
Another 'win' for me!  My plants get watered at least every 3 months, but probably not more than that.  And you can tell too :) 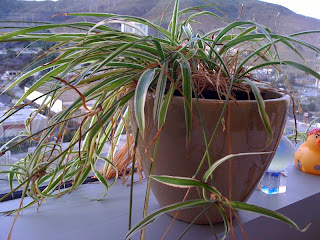 Resolutions are fun when you set low expectations for yourself :)
Posted by Channan at 6:59 PM 2 comments:

Don't look a gift Agility Surface in the mouth

We went to a trial at  Rancho Murieta on Thanksgiving where the surface was a wonderful pale, loamy sand mixed with felt.  It was divine.  I heard there was a huge world equestrian event at the facility and the surface cost $50, 000.  It felt like a million.

Dogs floated as they ran on it, canine masseuses and chiropractors alike composed songs about how refreshed dog muscles felt after running on the surface.  I cornered anyone I met after the trial and expounded on how wonderful the surface was.  People who had no clue what agility was started avoiding me because they knew if they made eye contact I would start talking to them about pale, loamy felt sand again.

And then there was the New Years Trial.

I told all of my agility friends that they HAD to sign up for the New Years trial because the surface was so wonderful.  Imagine my dismay when I arrived to find plain brown dirt.  At first it wasn't so bad.  We've run on plain brown dirt before.  But this wasn't the USUAL dirt.  It was slippery, oily dirt.  Bars were coming down left and right, dogs who normally take every obstacle in their path ran around jumps because they just couldn't keep their traction.    This wasn't just dirt, it was the antithesis of the pale, loamy felt sand.  This was the price we had to pay for the wonderful Thanksgiving trial agility surface.

I know what you're thinking.  Apollo went 6/6 at the trial, got his MACH3, could it be that bad?  Well for some dogs it wasn't.  My theory (which is quite possibly wrong) is that dogs with straighter fronts did better on this surface.  Apollo is one example, I think he might have actually enjoyed the evil dirt surface.

Rampage seemed to do ok on the surface, he slid a bit but his only faults all weekend were weaves pole faults, but boy we had a lot of those!  It's easy to blame it on the surface (and I think that did play a role, the weave pole divots were like moon craters) but mostly it's a training issue.  Rammy hasn't done many weaves in the past 2 months.  I was surprised at the weave fly-by's he did though.  His entries have been pretty good in the past.  We only got one Q on the weekend, but it was his last Exc A JWW Q so now he's Exc B JWW.

Icon was really affected by the surface.  On Friday he dropped a bar in both runs and then Saturday and Sunday he qualified but he was slower than normal and his jumping was horrible, especially in his JWW runs.  He was measuring and stutter stepping the whole way through.  There was only one run we had where I felt like we were running close to normal, our Saturday Standard run. On our Sunday JWW run, we were even below the 5.4 yps cut-off time for World Team Quals.  I think that's the first time this have ever happened in his entire AKC career.

I was relieved when we had a lesson on Tuesday and his jumping looked good.  I've always known that dirt is not a good surface for Icon but I never thought it could be that bad.

And on New Years Day I started having horrible back pains.  I blame the surface for that too.

Videos can be seen here, I don't feel like embedding them :)
Posted by Channan at 10:03 PM 4 comments:

This means no more jumping 24" for Apollo; at our next trial he is entered in 20" Novice Preferred.  It's a bit sad because he's still doing so well jumping 24", but he doesn't need to be jumping that high anymore and I've heard rumors that AKC nationals might be on the west coast in 2012.  It sure would be cool to qualify Apollo for that, if it turns out to be true.  He'll be closing in on 10 years old at that point and might not be doing agility at all anymore, but that's what I thought a couple years about how he'd be doing at 8 years old and I was wrong then.  Apollo is full of surprises. 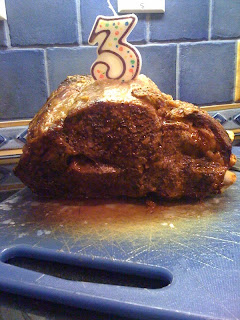 To celebrate his MACH3 I made Apollo a 3 rib standing roast!  He is not happy that he has to share :)

edit:  Icon was happy to share though.  As the rest of the dogs and I were hanging out on in the living room he snuck into the kitchen, grabbed the remaining roast of the counter onto the floor and started eating it.  Luckily I caught him soon after the roast hit the floor. I guess the remaining roast will be cut up into dog treats.  Well played, Icon  Well played.  You have everyone else on the planet thinking you're a 'perfect angel' but I know better now. 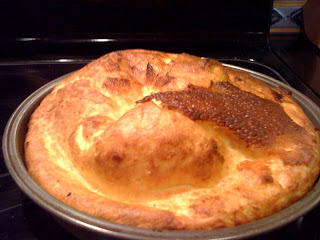 And what is prime rib without Yorkshire pudding? 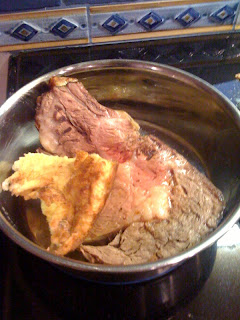 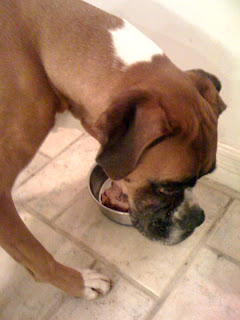 Waiting, uhm, patiently for a release word to eat. 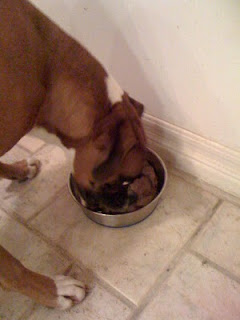 He started with the Yorkshire Pudding.  Weirdo :) 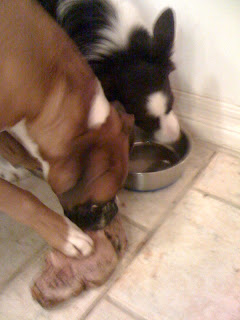 Rampage cleaned his bowl when Apollo moved on to the meat.  I love how well my boys get along :).