One of the reasons I haven't been posting much is that I've been hiking a lot.  One day while on a 6 mile hike with Tammy we started talking about doing longer hikes and got the brilliant idea of doing a full day hike.  Our plan is to hike the Ohlone trail this Thursday.  It's 29 miles from Livermore to Fremont.  I'm really looking forward to it!  In order to work up to hiking such long distances we have spent Nov and December doing longer and longer hikes.

Just before Christmas we went on a 22+ mile hike.  We were supposed to be done by 3pm but we started later than execpted and it took us longer than expected (I think we stopped for too many photos!) so we finished the last mile or two in the dark.

Tammy adjusts her dogs packs at the trailhead.  It was around 10am.

Starting out on the trail.  Everyone looks happy because we haven't started climbing yet....

I had a bit of trouble getting Rampage's backpack to stay level at first, but after adjusting a few times it finally did.

Then we started to climb

Rampge says, "We have to climb that too??"

The blue arrow points to where our cars are parked at the trailhead.  And we've only just begun!

It's hard to see but just above Tammy's head is Lick Observatory on Mt Hamilton.

First stop to pose for photos!

The only time I get ahead of Tammy is when we're going downhill.  She's faster than me going up!

Lick Observatory is getting closer

Rampage is just so handsome!

Tammy thought camping overnight here would be fun.  I disagreed.  It reminded me of the Blair Witch project.

Looking back at the Pala Seca Cabin (far right in the photo).

More posing!  After this the hike got easier for about 8 miles since we were going along the ridge.

At one point we saw two bobcats.  There is a black dot just to the right of the center of the photo that was a bobcat running away from us.  It was very cool!  To the left of the tree on the hill is Lick Observatory.

Stopping for a human potty break

We had underestimated how much water we would need (and the trail map said there was water on the trial, which was not true!) so we took a side trip to a fire station to refill the water.  The fire station was deserted.  I climbed over the fence to refill and the first faucet I found was dry!  They had turned off the water.  But luckily I found another one that was turned on.  Phew!

Everyone is hydrated and ready to get back on the trail

We stopped for lunch a bit over half way (I had my garmin with me but it died after 11 miles so we didn't get a full reading of this hike).

Tricki and Cassidy decided it would be a good idea to take a quick nap.

The dogs feet all looked fine but we decided to have them wear some booties for a while to get used to them, in case they were needed at some point.

It was pretty late in our hike when we started encountering cows, but then we ran into them pretty frequently.  It wasn't so bad until we were coming down the final stretches of the hike in the dark.  Then it was a bit freaky.

The sun is starting to set.  Lick Observatory is on the hill.  The ridge to the left behind the trees is where we had hiked earlier in the day.

Stopping for our last break.  San Jose is behind Tammy.

Cassidy asks, "are we done yet?"

Icon says, "I can see our house from here!"  (Cassidy is skeptical)

And then we were hiking in the dark.  Luckily both Tammy and I brought our headlamps JUST in case.

And then at home I had tired border collies

Sorry it's been so long since I've posted.  Life gets in the way....

The border collies got to hike up Mission Peak this morning 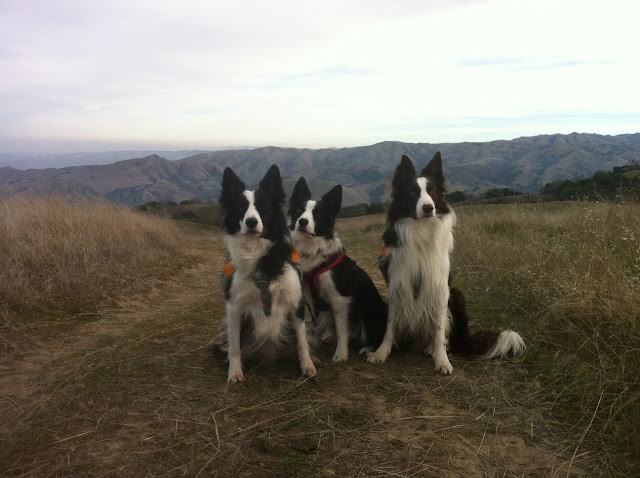 And Foster and Apollo got an outing without any Border Collies! 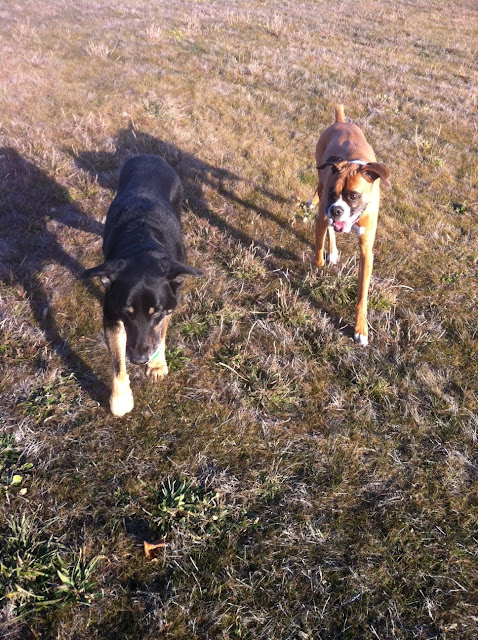 The consensus is that we had a very Merry Christmas.
Posted by Channan at 6:10 PM No comments:

Holy cow, where have I been?  I'm not even entirely sure.

I regret not finishing my EO recap, but I will summarize by saying Icon did great.

Work has been stupid crazy lately and I'm pretty drained by it.  I have also been trialing more than usual, which is also very draining.  I think out of the last 5 weekends we went to 4 trials.  Only Sat/Sun though, I have no clue how people manage to do 3 or 4 day trials every weekend.  Am I the only one doing agility that has to work on Friday????   But things will be slowing down soon, at least for trialing.  No slowing down in sight at work.  :(

I didn't think I would be able to watch any of the WC this weekend because I can't mess up my sleeping schedule staying up that late.  But it just occurred to me that I have to be up for 5am meetings on Monday and Tuesday so even if I can't stay up late this weekend, I can get up early to watch!  It's a win-win situation.  I get to watch some of the WC AND it will help me get on schedule for next weeks meetings.  Aren't I smart?  That's why they pay me the big bucks!  Or something like that...

As soon as we left Gmunden (say it, Gmunden) it started to pour.  It either rained, poured or pissed cats and dogs the entire trip from Gmunden to Bad Hall.  We not only felt like there was an ominous dark cloud following us to Bad Hall, there quite literally was.

And this is the part of my trip where there detailed photo diary breaks up into random narrative (and any photos have probably been posted on facebook already).  I didn't take many photos after arriving at Bad Hall. But that's probably for the best because who wants to see dozens of someone else's vacation photos?  I imagine that my last 6 blog posts are the equivalent of my neighbors politely but determinedly requesting my presence to their vacation slideshow and me not being able to find an excuse.

When we got to Bad Hall we found our hotel with only a minor detour to the towns aquatic centre.  We all got our room keys and decided to check out everyone's rooms  so we could see how ours measured up. First was Laura's which was a moderate sized room with a single bed and a balcony.  Nice.  Then Nancy's which was a HUGE double room with a balcony.  Jealous!  Then Susan, who had a huge double room.  No balcony, but good size room.  An then me.  We walk into my room and it's a single bed and... well nothing else would fit in there!   It's the smallest room you could ever imagine.  I ranted and railed at the front desk but they swore that they couldn't get me anything better.  I managed to get a different room on the floor above, but the room was the same size and even hotter because it was up higher.  Great.  I had to spend a night in that room but I did manage to get a larger room with a double bed the following day.  I had to pay more but since I no longer felt like I was sleeping in a coffin it was worth it.

Practice on Friday was good, not much to say about that.  Afterwards Laura, Nancy and I went for a long walk in the woods near the hotel.  None of us remembered our iphones, which is a shame because we would have had some good photos from that walk!  We found hammocks, sculptures and a playground where we could have provided some great photos.

We also went for a walk through town and we did remember to take our iphones for that.  We ran into a few Team USA members (we frequently did when walking through town - it wasn't a large town.)

When we first arrived at the hotel we were a bit shocked to see people wandering around the lobby and restaurant in their bathrobes.  But that was nothing compared to what we saw around the town!

Kep could live without them.

And then the competition! (which will come in the next post)

Gmunden was beautiful but as we reached there the weather started to change (seriously, it's fun to say Gmunden, try it.  Gmunden.)

There was more water to torture Icon.  It didn't matter that he had gone swimming in the morning.  He wanted that water.

A swan and her goslings.

Attack of the swans!

Posted by Channan at 9:47 PM No comments: