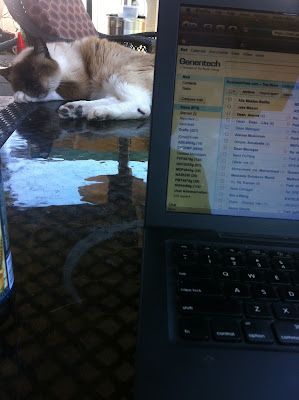 Today I worked from home.  It was a perfect day to sit outside and get lots of work done!  Pook was a great assistant.


Icon was also very manageable, as he was easily distracted when I turned on the sprinklers. :) 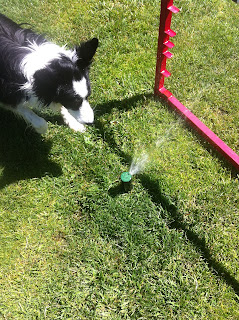 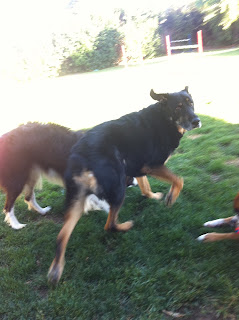 The other dogs weren't so helpful.  They wanted to play the entire time. 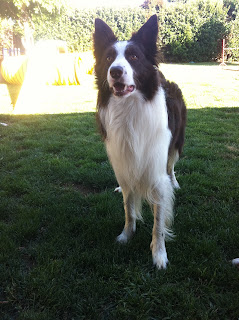 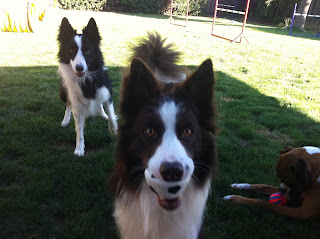 Except when he wanted to play.

I wouldn't want to work from home all the time, I miss the f2f interaction with my coworkers.  But on a beautiful day like today, I sure loved it!
Posted by Channan at 9:33 PM No comments:

How could anyone resist this mug?

For those not on FB, it turns out that Icon tested positive for Lyme disease.  Now the big question, which will never be answered, is where did he get it?  Lyme disease generally takes 2-5 months before a dog will show symptoms.  In some dogs it goes undetected for over a year.  That's a huge window.

He was 'off' for at least a few weeks before tryouts.  We went to a USDAA trial two weeks before tryouts and he ran courses happily enough but he wasn't excited ringside.  I remember at one point a very exciting dog was running and instead of watching with intensity he climbed into someone's lap.  At the time I made a comment about how odd that was.  His times were off of what they normally are and he missed at least 3 a-frame contacts, which is totally unlike him.  The whole weekend was so unlike him that I took him to an orthopedic surgeon to check him out.  The orthopedist (who ironically was visiting from University of Minnestoa to cover for Dr Sams - oh, why couldn't he have just said, "Hey, maybe it's a tick-born disease?") couldn't find anything wrong with him and sent me on my way telling me I was overreacting (in a very polite way of course, he is originally from Canada).

Icon's symptoms could have started at AKC nationals, he definitely wasn't himself there either but I thought it was the dry, slippery surface.  And maybe it was, we'll never know.

Anyway, Icon is still doing great.  He got his Mach 4 at the TRACS trial two weeks ago and last weekend he won GP/SC and DAM Team at a local USDAA trial (admittedly it was a relatively small trial but I thought he ran great).  He has 3 days left of his doxycycline treatment and then we're done.  After that he will be considered 'in remission'.  The treatment doesn't kill the bacteria entirely; it inhibits reproduction, which is why it requires such a long course.  Quite often Lyme disease will come back.  So while I'm happy that we'll be done with the antibiotics soon I'm worried that he will start showing symptoms again eventually...
Posted by Channan at 10:21 PM 1 comment: