Weather for the upcoming regionals

Why do I keep hearing people complain about a heat wave for the SW regionals this weekend??? I've been checking accuweather on a daily basis for over a week now and the projected temperature for Salinas hasn't gone above 74 for the weekend! Indeed, it has been DECREASING the last few days! Maybe they think it's in celsius? I think 74 celsius would be considered a heat wave...Maybe Prunedale, a mere mile away from the Salinas weather station, will have 30 degree higher temperatures than Salinas iteself?

Alternately, the weather for the Texas regional the next week is...well actually... not bad! Especially considering it's in a climate controlled arena. This will be a first for me. I never even knew such places existed!

I could do without the rain.

The secret to getting a confirmation for AKC Invitationals entries

You just need to pay with a credit card and leave your expiration date blank.  Then they have to call you to find out what it is!  Brilliant!
I wish I could say I forgot to add my expiration date JUST so they would call me, but that would be a lie.  I just forgot to add it.  But at least now that Polly's entry has been received!
Posted by Channan at 9:45 AM No comments:

Throw me in a straight jacket and call me crazy

I'm getting a puppy!
Posted by Channan at 3:53 PM No comments:

For the last while I've been either working or sleeping so the dogs have been pretty neglected and I haven't had anything to blog about.    But last night I decided to watch some of the olympics and let the dogs play with a big box that I have yet to throw out (when I work a lot, the house gets neglected too).  Icon liked it.  Foster and Apollo weren't quite as interested.

I did manage to get to the AKC trial last Saturday, but didn't do so well. Icon dropped two bars in JWW, but got Std. Polly got JWW (with a pretty ugly run) and I messed up his weave entry in Std. No bars down for Polly though!

Here is Icon's Std course, which was pretty nice.

Posted by Channan at 8:14 AM No comments:

Death to the wicked

I just killed 2 big bugs having sex on my wall. I think they were 'mosquito eaters'. I guess if you're going to be killed, you might as well go out having sex.

I broke my broom while murdering them, damnit.
Posted by Channan at 9:22 PM No comments:

and I got a new toy! Isn't it twisted? Well, it does straighten out on request.

I got this thing for a couple of reasons. I was riding my old bike to the shuttle for work and it was stolen, so I needed a new bike anyway. I figured a folding bike will mean that it will never get stolen (I'm sure I'll forget it on the bus sometime though - most likely the first time I take it). Having a bike at work with me means that I will also be able to tootle around SSF and maybe take it to the company gym down the street (haha, like I would even do that - I barely leave my office to pee once I get in there). It's also small enough to fit in the rv nicely so I don't have to worry about a bike carrier. This way if I'm camped somewhere with a store nearby I can ride it over to get my staples (like steak and wine). It'll also be very handy at large trials such as USDAA natioanls, although I have to see if the dogs are willing to cooperate with that one... 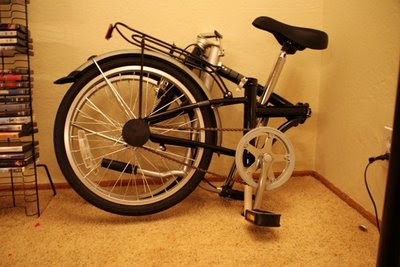 We had our maiden voyage with Viewbert on the weekend, and it was everything I could have dreamed! *sigh*. Well, seriously, it was lots of fun. I left home at about 4:45 on Saturday morning and arrived at the trial site around 6. I thought I made good time even though I didn't go over 63 mph. I forgot to put my fasttrack in the rv and when I got the the Richmond bridge I realized that my wallet was at the back of the rv. So while sitting at the tollbooth I had to stick it in park and run back to get it.

The dogs were very good up until that point. Apollo laid by me (although he was more than a bit freaked out, panting and shaking) and Foster and Icon were in the back somewhere. But after the tollbooth, EVERYONE decided they wanted to be up front, and the gear shift got knocked into 3rd gear a few times before I relegated Foster and Icon back to the bowels of the RV.

When I arrived all of the spots along the main RV drag were taken. Ron suggested a spot for me, but it woudl be blocking in some other people and I didn't want to annoy people my first time out! So I ended up behind the vendor area, which ended up being a really good spot to display my new rig :). And Icon and Apollo got a good view of the rings from the bedroom window.

So I got to set up my yard (Apollo escaped 3x before I managed to make it Polly-Proof) and it ended up being pretty perfect. The bed was surprisingly comfortable and I slept for almost 12 hours saturday night! Woot!

The trial was a bit of a bust. 2 q's for Icon and 1 for Polly. Both of Icon's runs were totally my fault and Polly's was really just bad luck. He got called on his dogwalk up contact and I really think it was a bad call. Of course I misjudged where I was for a front cross and caused to miss a tunnel entrance for a refusal anyway, so it's not like it matters. But it's the principle!

Here is his run. I think it looks like he got it with his rear feet.
Man, I had some sucky handling last weekend! Hopefully that was just a temporary thing...

When the going gets tough...

The tough go shopping!
Thanks to the takeover offer from Roche and stock going up, I exercised some options and had a bit of extra cash laying around.  Why bother re-investing the money in something smart when I can buy a new toy?  So last weekend I brought home my new View.    I had a great name for him, but forgot it.  At the time I thought of it I KNEW I should have written it down, but I didn't!  So now for a name, I'm kind of thinking about Viewbert (like Hubert).  I joined a View/Navion yahoo group to learn the secrets of these rigs and someone there named theirs Beluga, which I thought was cute and pretty fitting.
So it's pretty cool, I really love it so far.  I plan on keeping it in my driveway where it JUST barely fits.  I'm hoping that the neighbors won't complain about it, because it's rather big!  People down the street keep their RV in their driveway, but it doesn't...uh...stand out as much.  I'm also a little worried about it getting damaged because the neighborhood kids will often play football in the street, and I can tell you that none of THEM are making it to the NFL with their throwing and catching skills. Our first trip will be this weekend to an AKC trial in Petaluma.  I'm really iffy about rving at that one because we'll probably be done by around 10 or 11am on Saturday, which gives me plenty of time to drive home and do productive things.  It's about a 1.5 hr trip.  But I figure I bought it, I might as well use it!  Next weekend I'm signed up for a trial in Dixon with RV parking but it looks like I will have to work that weekend so I'm not even sure I'll get to go to the trial!  I'm looking forward to the next two weekends in Prunedale for USDAA shows.  Even though it's only an hour to Prunedale it makes WAY more sense to stay overnight for those ones since the trials run later.  There are no hookups in Prunedale so I will be boondocking, which should be a fun experience!
I'm also looking forward to USDAA nationals.  I plan on going to the 3 day AKC trail in Pahrum, NV again and then heading over to Scottsdale after that.  Hmm, I guess I should look at where to stay between NV and AZ for a few nights.
Posted by Channan at 8:01 AM No comments: