The end is near!

Even if Rammy doesn't think so.  But girls are the boss. 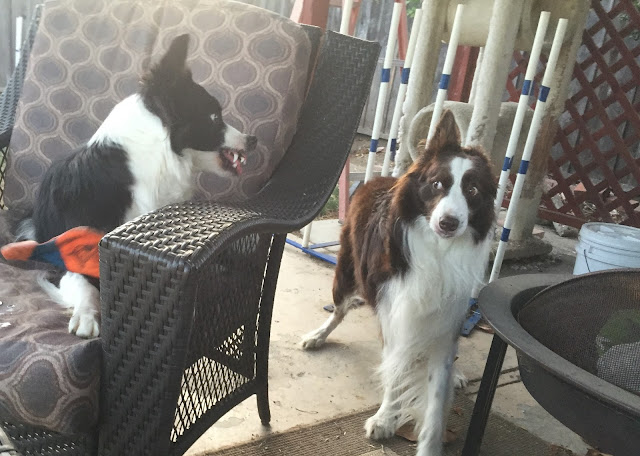 Well I see why people spay their dogs.  Kirk is in season... I had to withdraw from 3 trials thanks to that.    Two were AKC trials and I had only entered Kirk and only 1 day and got most of my money back, for which I'm thankful.  The last one really hurt though, even though I got my money back for that entirely since I withdrew before close.  It is SMART USDAA, which is the trial before regionals.  This is Kirk's first trial where she's old enough for USDAA and I was counting on the GP/SC opportunities so we might be able to play at regionals.  Additionally, I was hoping it would allow her to become acclimated to jumping 22" (assuming she doesn't measure into 18", which I'm still hoping for but not expecting).    She MAY be out of season by SMART but I didn't feel right waiting until last minute to tell them.  Maybe if she's out I can rescind my withdrawl.  One can dream :)

So anyway, I'm still looking forward to Bay Team Regionals.  Even if chances are unlikely Kirk will be able to play in the main events she does have a fun team!   And Rammy already has his Q for psj and  bye for pGP so he gets to play.  Icon hasn't been to any USDAA trials this season so we will try in the local's on Friday, but I'm not expecting much because in the limited training we do he tends to run around more jumps than he takes.  He sure seems happy doing it though!
Posted by Channan at 9:25 PM No comments:

It's a good thing her agility future looks bright.. :)

We woke up to a beautiful morning!

I normally don't sleep well my first night out backpacking because I hear bears and mountain lions and other scary things whenever the wind blow or a dog shifts but I slept SO well that night.

I made Kirk wear a booty on her cut paw.  She didn't like it at all.

Although she was fine with it when we started hiking.  I started out with her on leash, but that didn't last very long.  And the booty didn't last much longer.  There were so many water crossings that it became a pain to pick her up and carry her over so I just took off her boot and let her go.

Can you spot Rampage?

We had a more leisurely hike out than we did on the way in and stopped to let the dogs play in the water.  This was Bear Creek (I think).

We also found a nice path down to a swimming hole at Swift Creek.

It wasn't TOO swift, but I did almost lose Rammy down the rapids to the left at first, the water was moving fast there!

So then I sat there to block the way.

Rampage loved the water here but Kirk and Brew weren't so sure, maybe due to the current.

And some gopro fun!

And then we were done!

I can't wait to go back.

We found a campsite!  It was a nice, previously established site with a fire pit. As soon as his backpack was off Rampage started his signature dirt rolling.

And Brew decided to relax.

The view as I was filling and treating my water.

We had a lot of thunder and a tiny bit of rain.  Rammy no like thunder.  He would have been happy in the tent, but last time we were backpacking with thunder I had him in the tent and he destroyed my $600 down sleeping quilt by digging.  But that is another story...

Brew and Kirk were not big fans of the thunder but didn't care as much.  Brew is NOT a cuddly dog so this is a very cute photo :)

Kirk enjoyed having her own personal warming station.

The view from my tent was... pleasant :)  The thunder was pretty much over by this point by Rammy was still concerned.

And it seems our campsite was often used by mule packers because after we set up and it was starting to get dark an old man with a pistol on his belt and a mule train on the trail came into our camp.  He first asked us (not nicely) how long we were staying and then proceeded to berate us for having a fire in the fire pit, which we had a permit for.  I tried to argue with him (while trying to keep Rampage and Kirk from barking at him and his mule) and insisted I had a permit while he insisted I didn't but before I could get it out Laura diplomatically told him "thank you for the information and good bye".  We didn't see him again but just before dusk a helicopter flew over our site 2 times so we started worrying he was right and we weren't supposed to have a fire.  I did call the ranger station after we got back to civilization and it was allowed.  The helicopter was just looking for fires started by the thunderstorm and the mule packer was just being an asshole because we took what he thought was HIS campsite.

To be continued...
Posted by Channan at 7:38 PM No comments:

I recently went on a backpacking trip with a friend to the Trinity Alps Wilderness.  I only brought Rampage and Kirk because backpacking with 3 dogs is... challenging.  We were supposed to be gone 3 days/2 nights but ended up being only 1 night because Kirk cut her pad the first day :(.  Many creek crossings meant it was beautiful there, but there was a lot of running through hard rocks after the creeks and it must have really softened her pads.

But Kirk was excited and raring to go at the start!

Taking a break at one of the many creeks.  We really didn't need to carry much water at all, which is a nice change from the Sierra's.

There also wasn't as much climbing as I'm used to in the Sierra's, which was really nice!  Although if we had continued our route on the 2nd day, I probably would have changed my mind :)

There used to be a bridge over this creek, but was washed out a long time ago.  It was easy for us to cross, but probably a bit more difficult in late spring/early summer.

Heading to Bear Basin, but Kirk wanted to check out the skull.

A row of dogs

I'm very bad at stopping to take breaks, I tend to just put my head down and keep walking.  That's why it's good to have friends that make you stop :)

This place didn't have a name on the map, so we dubbed it "Kirk Meadow".  It was quite lovely but, errrr, moist.  Earlier in the season I think you'd be slogging through marsh.

So many beautiful wildflowers

I don't know why, but I feel like blogging again.

And here is Kirk!

As I kinda expected she had a bar every run (and two in one run).  I'm hoping we get this sorted out.  She happily drops bars at 16" too, though.  We would be in masters for now if it wasn't for that bar thing ;).  But otherwise, she is pretty awesome!

A little sequence from practicing at 22" in 100 degree weather (probably should have stayed home that day).   She's so much fun, even when hot!