I got some photos from Marcy so I will go back to our fist days in Prague. All the photos below are from Marcy Mantell.

Icon gave me fair warning about his future suicide attempt on the Charles Bridge when we were crossing the first bridge. I should have recognized this reckless nature brought on by the Prague air.

I look good with a Sheltie!

My ham with butter meal. I look SO impressed.

I ran out of money, thank god Icon was there to get more for me.

I fed the dogs Red Snapper for dinner. It was the first time they had it and it went over great, they all loved it.

Until about 3 hours later... Then Rampage started puking it up. He puked the whole meal within 4 episodes. The first two looked alarmingly like the projectile vomiting which is a warning sign of a bowel obstruction (the last 2 were just normal horking pukes). He was laying on the floor in the living room and all of a sudden he made a *Gurp* noise and a chunk of fish flew out of his mouth and landed about 3 feet away. We were all pretty surprised, I think Rampage most of all!

So I was actually relieved when Apollo started puking up his Red Snapper too, although he wasn't as dramatic as Rampage. At least I knew it was the Snapper. I still don't know for sure if it just didn't sit well with them or it was 'off' but I'm guessing it didn't sit well because Icon and Foster were fine and so were Rampage and Apollo after getting it out of their stomachs. Apollo even tried to eat it again, but I figured that might not be the best idea so I stopped him.

I really want to add more seafood into the dog's diet, but I think that's the last time I'll feed Red Snapper.
Posted by Channan at 5:07 PM 2 comments:

All roads lead to Wenceslas Square

Since the dogs were so tired on Tuesday Marcy and I decided to leave the dogs at home while we went sightseeing on Wednesday. But of course we had to take them out for a walk first. Well the "walk" ended up being over 3 hours long. Good thing the dogs were both recovered!

We started out at a park around the corner from our hotel.

And soon found another park.

We saw a guy rolling a keg down the street. No one but Marcy and I thought this was odd.

Dogs are welcome in most places. But it's quite obvious when they aren't.

When we were at park was saw a lady with a huge un-neutered Rhodesian Ridgeback on a flexi leash. She was about 30 feet away on the grass and as we passed her I was disgusted to see her tell her dog to sit (which he did) and then start hitting him in the face with the flexi handle. The poor dog just sat there and cowered. What a bitch.

Standing on the museum steps and looking out to the square.

Icon wanted to go swimming in the fountain. At the fountain I was asked by a family if they could get their photo taken with him. It was a bit odd but I said yes. The lady said he was beautiful and looked just like her dog, who is a COCKER SPANIEL! How on earth does Icon look like a Cocker Spaniel???

View of the museum from the other end of the Square (which was really more of a rectangle).

What a job to have! We passed guys installing cobble stones near our hotel. They look like prison workers in their clothes. They weren't though.

What a beautiful city.  Lots of old buildings and cobblestones.  It's very commercial though.  At times I felt as though I was walking through an amusement park that was trying to look like it was Prague.

I was disappointed in the photos I got.  They never look as good as they do when you're there but they were extra bad on this trip.  Oh well :)

I traveled with Marcy and Wave and we arrived in Prague at around 9am.  We decided to try and get accustomed to the time change and go out and sight see right away.  It wasn't easy since neither of us slept on the plane, but we managed and I didn't even get very grumpy until around 5pm.

Our hotel was in a good area, within walking distance of pretty much everything in Old and New Prague.


To the right is Charles Bridge (total tourist trap) and to the left the big complex is Prague Castle.

Icon tried to convince Wave to go swimming in the river, but she didn't want to get wet.  She's such a princess.

Cops and segways are common sights in Prague. Not always together.

Surprisingly, the dogs didn't fare as well with the time change as we did. We regretted taking them sightseeing on Tuesday because they were so tired. Wave was especially tired, she could barely keep her eyes open.

Icon was too though. He passed out really quick when we stopped for lunch and didn't move until we stood up to leave.

On the bridge. A tourist trap complete with religious musicians. Wave really didn't like those guys.

I had a scary moment on the bridge when Icon decided to jump up on the stone fence of the Charles bridge. He knew water was down there but I guess he didn't know how far! If I hadn't grabbed him he might have gone over. I generally consider Icon to be a sensible dog, but he certainly wasn't showing sense then!

We ended the day going out to dinner with Rob, Derede and Wings. I got "ham with butter" for dinner and it was exactly that. Cold sliced ham and a pad of butter. That was the only really disappointing meal I had in the Czech Republic.
Posted by Channan at 11:35 AM 1 comment:

Icon's brothers wanted to welcome him home and congratulate him for doing a great job at the EO.

So they insisted that he get a steak for dinner to celebrate.

Pook had to inspect it first.

Hmmmmm, maybe I should eat this instead of Icon....

Is this for me?

Are you done taking pictures?  Can I eat now??

Haven't had time to post anything lately, so here is something for your amusement.

Ok, here are some videos.  The 4 legged flix people told me they wouldn't get them up until the end of the week due to vacation but it looks like they go them done before.  The did a good job of managing expectations.

It's interesting how in some runs he looks comfortable doing agility and in others he still looks like an awkward, gawky adolescent.  It seems the 'comfortable' runs are becoming more frequent though.

This is the bad a-frame Snooker run.  Ouch, it is worse than I remember it.  He totally went 'splat'.

Our Starters Pairs title! How lucky am I to have 3 good pairs partners in a row.  I guess I know the right people ;)  Rammy's part was REALLY hard for baby dogs in this one.  It was a natural path for the dogs to go tunnel - jump - tire instead of taking 2 jumps after the tunnel so I decided to over handle with a front cross followed by a rear cross.  It worked out though ;)

All of his videos can be found here.
Posted by Channan at 8:14 AM 1 comment:

I was really happy with how Rampage did this weekend.  It was a huge weekend for him with 6 runs Saturday and 7 today since he made it to SC finals!  He got all of his a-frames this weekend and I was happy with all of them aside from a one-hit yellow wonder in snooker.  The one-hit yellow wonders are scary enough on an AKC a-frame but on the USDAA a-frame they are downright heart stopping (one hit yellow wonders is when the ONLY hit the yellow on the way down).  He had nice a-frames after that one though so I think he might have learned something...  His dogwalks were all good aside from his two stupid standard runs.  For both runs we missed qualifying by just the dogwalk (although we did have other acceptable bobbles.)  We even had 4 good dogwalks in our gamblers run today but the judge got mad and said to me, "That's called loitering!"  Well it was a stupid gamble that I didn't even want to attempt and anyway it wasn't loitering, it was training in the ring!  So there.

He was starting to show some weird bc behavior today by getting freaked out around the ring at the ring crew, but he redirected back to his leash pretty well.  He definitely gets distracted when Icon screams as I run him.  He'll have to get used to that though because I don't see that changing anytime soon...

So Rampage ended up with his Starters Pairs title (thanks Tricki Woo!) and Starters Jumpers title and a SC Q!  We had a bar (he actually hit the stanchion) in the finals so we weren't in the money but that's OK, Icon brought home $51 :)  In Snooker and Gamblers we just need one more Q.  Still need 3 in Standard though :(.

But still, I swear he had a hair in the dw contact on Saturday's Std run.  He has really long toe hair!  Really! 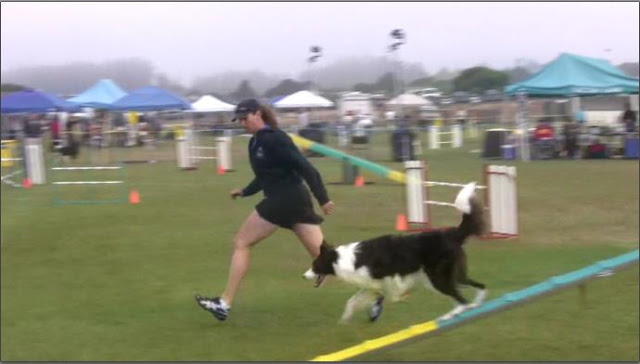