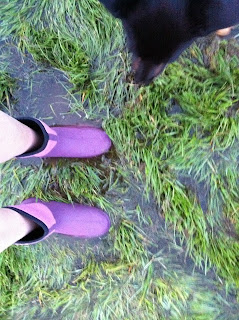 The weather has been really crappy here lately. The park that I take the dogs to is usually so greedy that you never get standing water there, but when I took the dogs there today I was glad I wore my rubber boots.
The trial that was supposed to be outdoors this weekend was moved indoors on dirt!  It's 2 hours away from me as opposed to the 1 hour that it would have been but I think the change is worth the extra drive.  Apparently the RVs won't be close to the arena so I think I'll just drive back and forth.  I'm not sure I'll go both days, I'll play it by ear.  The thought of 8hrs in the car over the weekend doesn't thrill me.

My other resolution of only eating humanely raised and slaughtered meat is going well but it means I hardly eat any meat.  In the last 3 weeks I have only eaten meat once, a ribeye steak.  And oh, how wonderful it tasted!   (I won't tell you how much I paid for it, though...  Ouch!)   A vegetarian friend told me that there is a term for what I am doing, "Flexitarian". I thought she was just making fun of me when she told me but it turns out the term does exist.. and it fits.

A side effect of my "Flexitarianism" is that I'm cooking more than normal.  I'm not sure how long this will last because I'm pretty notorious for going through cooking spurts that die out after a month or so.    :) 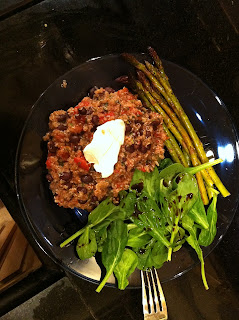 I had a very tasty meatless dinner tonight, I made quinoa and black beans for dinner and teamed it with some young asparagus and baby spinach.  Yummy!
Posted by Channan at 10:37 PM